Since 1926 Booroomooka angus has had a strong commitment to identify females that have the traits to increase profitability. These cattle are multiplied, resulting in a superior herd with depth of breeding and consistency.

Since 1926 Booroomooka angus has had a strong commitment to identify females that have the traits to increase profitability. These cattle are multiplied, resulting in a superior herd with depth of breeding and consistency. Increased scrotal circumference at 400 days of age is associated with increased semen production in bulls, and earlier age at puberty of bull and heifer progeny. Bulls with larger scrotal size ebvs tend to have daughters with shorter days to calving interval. To select for calving ease we weigh every herd book registered calf and report to breedplan if there is any calving difficulty. Birth weight ebv’s are used in selection decisions.

Lower birth weight ebv’s are favored for calving ease however they are often associated with lower growth potential.

By weighing all calves at birth, 200 days and 400 days we are finding angus genetics with moderate birth weight and above average growth. The only way we can find animals that “bend the growth curve” is by collecting accurate birth weight data from large numbers of calves in valid contemporary groups.

In most situations an optimum growth point will be reached where less emphasis should be placed on further increases in growth. Growth should be optimised not maximised as it is a cost trait. However in general, low growth will mean lower profitability. Marbling, is no passing fad. Marbling is the major contributor to increasing eating satisfaction. Increased satisfaction will the increase demand for beef. Research by AGBU, MRC, CRC has shown that IMF% and actual marble score are reasonably correlated and selection on IMF% will improve marbling. To improve accuracy, the IMF% EBV calculated at Breedplan also includes abattoir data, overseas EPD data as well as ultrasound. Increase in eye muscle area has a positive relationship with retail beef yield. The challenge is to identify cattle that increase eye muscle area without reducing quality.

Booroomooka continues to make genetic improvement in economically relevant traits. In an ideal situation it would be desirable to select animals for breeding that excel in all traits. But, in reality it is always necessary to make some compromises in balancing the strengths and weaknesses among the animals available for selection. A selection index is a formal method of combining Estimated Breeding Values (EBVs) for different traits into a single $Index Value. 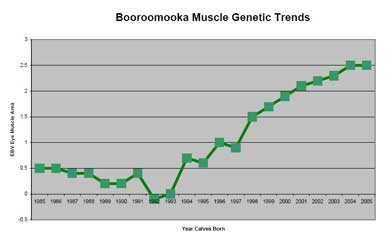 Variation in $Index Values between sires indicate differences in the expected net profitability per cow joined.

The composition of any selection index is sensitive to the assumptions used in the breedobject analysis.

$Index Values have been calculated for different production systems and markets as described below. For each $Index, typical production parameters, prices and production costs were assumed for a beef enterprise operating in the past three years. It was also assumed that the enterprise obtains benefits from improved carcase performance (eg. via retained ownership to slaughter) in addition to improved herd productivity. In addition, it was assumed that feed was a limiting resource for a large part of the year and any increase in herd feed requirements has a cost. In the self-replacing herd cases an average calving rate of 85% was assumed, with a moderate concern for calving difficulty.

Angus Australia has developed four new BreedObject $indexes. These are:

To see more information click on the links below

The Booroomooka Female Herd is highly efficient and has been developed since 1926. If you would like to purchase high quality stud, commercial females or embryos, please get in touch with us.

The Advantages of The Angus Cow